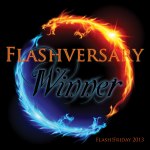 To Dream of Legend

No matter what happens, they never look up.

The water draws them downwards, without our help. It mesmerises them, with the flipping and flicking of a tail here, a rising head there.

And if ever the water should break and thrash, they may glimpse what they swear is reptilian skin, gleaming and rolling beneath the foam.

And they chatter of the rising and surfacing of what must have been the Monster, picturing her surging up from the deep for a brief, playful gasp of pure Scottish air, and then submerging, to swim once more along the murky loch bed.

They do not look up. They don’t pause, for a moment, to replay in their minds that strange, swift javelin of wind, moments before. They fail even to imagine an invisibly fast, joyful dive, straight from the clouds.

We play our part, of course. It is in our interests, too, to keep their attention focussed on the loch. We gather them around it and sell them our tartan landscape, woven of underwater caves and elongated prehistoric necks. And we take them out onto Loch Ness itself, where they clutch binoculars, and shortbread, and a growing hope, staring down into the opaque black water as if persistent eyes might penetrate what light does not.

Back on land, we’ll add soda to their Scotch. Water onto fire. Beside roaring flames, we’ll bid them relax, and think themselves brave- to contemplate an animal that has swum against the tide of evolution!

But we will not feed them the courage to dream of legend.

We will not carve her pearled, glistening scales on the wet, smooth skin in their minds, nor paint the glint of talons and the arc of wings onto clumsy flippers.

And we leave, uncorrected, the convenience of “Monster.”

We will look up, always, when her soaring presence circles and scorches the skies. And we will forever distract the crowds with weak, watery myths, whenever she desires to plunge and swirl her fiery form through the cool, onyx waters of Loch Ness.

She is more magnificent than this world could ever bear.

I stole a name from the wall. I said, “Richard Thornton,” like I uttered it all the time, like I whispered, “Richard,” in dark back seats on Friday nights.

But they were pressing me again, teasing me, asking, “Have you ever even kissed a boy?”

I hadn’t. We were on a class trip, standing in front of the Vietnam memorial. I looked up and my eyes found him. “Richard Thornton,” I said. “I met him at a mixer at Kennedy Prep.”

They didn’t believe me, those girls with their peach skin and shiny lips, the curls that fell in perfect ringlets, like they were drawn by an artist. They walked away then, and I stomped my foot, took my soda cup and threw it at the wall.

The passers by glared at me, their eyes wide and angry, so I hurried to pick it up. That’s when I noticed the lady staring at me.

I used the sleeve of my sweater to wipe the drops of soda from Richard Thornton.

I was walking away when she spoke.

“He was mine,” she said.
“What?” I turned back.
“Richard,” she tapped a slender finger gently against his name. “was my high school boyfriend.”
“Oh God, I’m such a jerk. You heard me?”
She nodded her head.
“I didn’t mean to,” I said.
She laughed then, even though her eyes were sad.
“I think he would’ve gotten a kick out of you using his name.”
I took a step toward her.
“Yeah?”
“He would’ve said, ‘don’t let those gals put you down.’”
“Was he a good guy? Was he sweet? Romantic?”
“He was a boy,” she said. “He could’ve been all those things, but I never really found out. He sent me a picture once, of a statue of a dragon by a beautiful body of water. I wrote back, but, well, you know.”
“I’m sorry,” I said.
She squeezed my hand and walked away, following the length of the wall, which seemed to stretch on and on for miles.

The old man gripped his wife’s hand tightly as he stared at the stone dragon out in the bay, the chill of the Vietnamese morning sinking into his bones. He sucked his lower lip into his mouth and bit down on it as his heart thudded in his chest.

The irony of the situation didn’t escape him. When he was 18, his tour of Vietnam was a nightmare that he had tried everything to avoid. Forty-five years later, he and his wife considered it the trip of a lifetime. They had spent a large chunk of their retirement savings to come here.

They’d met up with two other couples, squad-mates he’d kept in sporadic touch with after the war and their wives. Over beers, they’d told the old stories, made richer by their location. He’d watched his wife while some of the more harrowing tales were told, and saw in her eyes the concern and empathy that made him love her.

They’d even managed to find one of the meaningless hills their squad had held at great cost for no reason other than their orders.

It had been the trip of a lifetime. But now, staring at the dragon, holding his wife’s hand, other memories flooded the old man. A girl’s faced stared back at him from the depths of time. She was young and beautiful in that exotic way. The Kansas farm boy who’d barely left his county before he got shipped halfway around the world was thunderstruck. From her first shy smile, he’d never had a chance.

One weekend morning, much like this, they’d rowed a small boat out into the bay and tied up in the shallow water by that very dragon. They’d made love. His first time, and hers. The dragon had guarded the encounter, seeming to give their union his blessing.

They’d never returned to that spot, but he would always remember it. Forty-five years later, every moment was etched deeply into his brain and his heart.

He felt his wife return the squeeze of his hand, and he wondered if she remembered it, too.