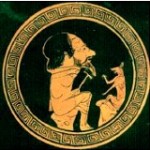 Flash fiction isn’t a new thing. It was pioneered by the likes of Aesop thousands of years ago–if legend tells us right, an ugly, yarn-spinning slave whose flash fiction (his celebrated tales mostly squeeze between 100-250 words) elevated him to the position of king’s councilor. His stories with their economy and wit must have offered the masses a happy respite from brilliant yet seat-numbing sagas like the Iliad–and we’re still reading them to our kids today.

That’s some fired-up flash. And that brings us to…

Flash! Friday exploded in Dec 2012 out of the rather unbalanced mind of Rebekah Postupak, co-founder of Shenandoah Valley Writers. Rebekah wanted a flash contest whose format and prompt varied each week. Where writers would comment on others’ entries and spur each other on toward writerly greatness. The contest ended in Dec 2015, after enough dreams to fill a thousand lifetimes.

Rebekah's dueling obsessions with flash fiction and dragons have finally found their happy place at Flash! Friday. She's co-founder of Shenandoah Valley Writers (SVW) and thinks there's pretty much nothing more awesome than when writing sets a reader's soul on fire.